Trucking Companies BC: About Us

Berry & Smith is a highly respected member of the transport community and trucking companies BC. Operating over 120 power units, Berry & Smith services North America, with a large focus on the western States and Provinces. Offering dry van, flat deck, and intermodal services from its three offices (Penticton, Vancouver, & Calgary), Berry & Smith continues to be an industry leader in customer service and satisfaction. At Berry & Smith, we maintain U.S. and Canadian Dangerous Goods and Hazardous Waste transportation licenses as well as memberships with the BC Trucking Association, Washington Trucking Association and the Intermodal Association of North America. Along with a modern and well-maintained fleet, implementing newly-evolved technology has allowed Berry & Smith to maintain sustainable growth. Accommodating and facilitating ever-changing business trends, Berry & Smith is proud to maintain a strong reputation and be a proactive leader in the transportation industry. Trucking is not Berry & Smith’s sole focus. Berry & Smith has provided the school bus services for the Penticton School District since 1964 as well as a transit system for the Penticton District since 1977.

Berry & Smith’s head office is located in Penticton B.C., and operates a B.C. MOT approved inspection and repair facility. The Head Office transports freight to all of their service areas, concentrating on van and flat deck transportation methods.

The Vancouver office is located in Delta B.C. This location specializes in intermodal transport and provides Berry & Smith the ability to move freight in and out of the west coast's ports and rail yards in both Canada and the U.S.A..

Berry & Smith recognizes the importance of both their customers and employees and their mission statement strongly focuses on this: “To strive to maintain a unified staff whose goal is to create an efficient and profitable customer service based business”. 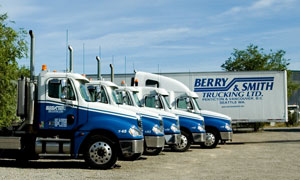 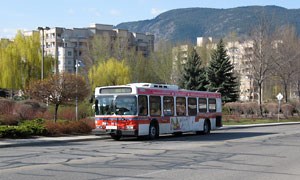 Berry & Smith originated in 1954 with Stu Berry and Ted Smith. Stu had purchased trucks to haul fruit, and Ted was always interested in trucking -- he bought a fruit truck and a school bus for the Naramata students. The two teamed up and combined their resources to form Berry & Smith. In 1958 it became official and Berry & Smith trucking Ltd was duly incorporated. The company started out as a fruit hauling company and grew to what it is today. Through hard work and strong customer service Berry & Smith gained a strong reputation of being both customer and service oriented. The company was able to grow, and ten years after being incorporated Berry & Smith purchased Carter brothers, a Penticton company that had operated trucks and school buses for the district.

In the early 1970’s, Berry & Smith purchased its first tractor trailer, enabling them to transport freight around the valley, later expanding to larger markets like Vancouver.

The acquisition of the Penticton school bus contract in 1964 and the Penticton transit system in 1977 established a transit service in Penticton, and Berry & Smith has been operating both ever since.

In 1989 the Vancouver office was opened. It originated in Burnaby but was later moved to Delta due to an ever expanding intermodal market. The Delta office still operates as Berry & Smith’s main intermodal transportation source. The Calgary office was opened in 2006 and serves at the company’s brokerage division.

From the beginning Berry & Smith has been a family business in the true sense of the word. The Berry kids grew up in the business and were driving trucks at a very young age. Stu retired in 1997 and the company is now run by sons, Matt (President) and Mark (Vice President).

Although a lot of changes have taken place at Berry & Smith over the years, what has not changed is the strong service oriented focus and reputation. The Berry family has always recognized the importance of the employees working together within the company and many of Berry & Smith’s employees logged over 30 years with the company before retiring; some continue to come back to help out when needed. 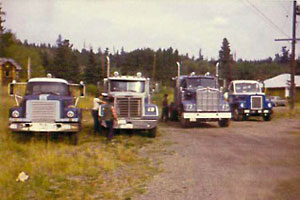 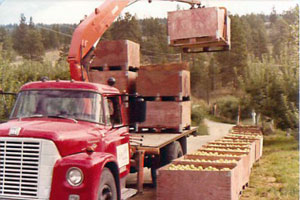 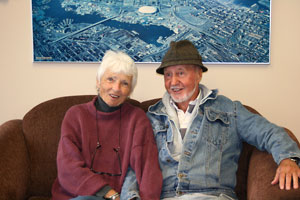 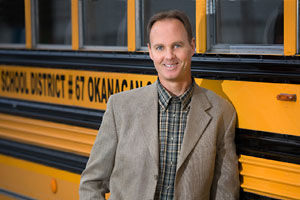